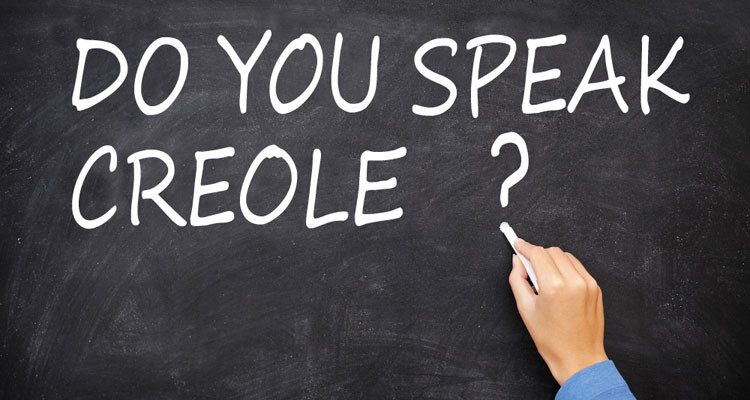 Is Creolese the national language of Guyana? And what role should it play in the education system? A heated public debate on these questions has taken place in the media recently. There have been interesting comments from the usual suspects on both sides of the argument. The four writers of this article join hands across the university hierarchy and across three generations, to add their voices.

We begin with a glimpse into a testimony of verbal interaction in a 21st century primary school in Guyana inhabited by ordinary Guyanese children and their teacher:

“I was teaching a grade 6 class at a school in the village that I live in. I don’t remember the subject but I know it was not English. One of my pupils was not paying attention, so after some time I decided to ask him a question based on what I was teaching. His response was, ‘Mis mi na noo.’ The instant he said those words, I echoed them in a tone loud enough for the class next door to hear. There was loud laughter from the pupils. Some of them even repeated  what the boy said. In my village they would say, ‘Mis, mi een noo.’ As far as they were concerned, he was using the ‘wrong’ language. As far as I, the teacher, was concerned, he was not speaking ‘proper English.’

The child’s face was flushed with embarrassment as he sat quietly and did not utter another word for the remainder of the session. Realizing what I had done, I felt ashamed of it. To make matters worse, I decided to have a ‘speak properly time’. If anyone wanted to say anything during that fifteen minute period, they had to use ‘proper grammar’ in carefully constructed sentences. For that entire period, my class was in absolute silence. They didn’t even want to ask to use the washroom or have some water. One boy attempted to speak but was laughed at every time because what he said seemed so funny and wrong to them.

In my first year at the University of Guyana, I took a course, ‘Language Education for Primary School Teachers’. My lecturer was one of the writers of this article. The course fostered a greater appreciation for the dialects (varieties) of Creolese in Guyana and developed my language awareness. I came to even greater understanding of Guyana as a country rich in cultural and linguistic diversity. I came to appreciate my first language more, and to begin to think about a different approach to teaching. The fact that children speak as everyone in their community speaks no longer presented itself as a problem, but as a cultural resource.”

Reading Allsopp, we learned that we (teachers) and our pupils should be allowed to use our mother tongue in school and that the system should take into consideration that we are a Creole-speaking nation. How indeed, could learning take place if we do not have freedom of speech? We would not want to share our opinions, ask questions and make meaningful inputs.

Still, many of our foremost educational leaders still continue to exhort Guyanese parents to get their children to speak and write ‘correct English’ as though completely oblivious to the fact that, for a large sector of the Guyanese population, English is not the home language.

Let us assume that teachers can and do maintain English as the sole language medium they use in the class. Such minimal exposure to English in classroom is unlikely to develop competence in English for a child who spends the bulk of his or her waking hours in a Guyanese environment. Members of a family or of a community speak a language which is most effective for communicating with those around them. There are very few communities in Guyana where English could perform this role. For any educator  to blame members of a community who do not choose their speech forms for children’s failure to perform in English is as pointless as King Canute cursing the sea for not obeying his exhortation to come no further.

WHAT DOES UNESCO SAY?

UNESCO recommends that “at least six years of mother tongue instruction is needed to reduce learning gaps for minority language speakers (our emphasis)”. The term ‘minority’ here is telling. It is usually minority groups whose languages are not used in schools and who find that their languages are discriminated against. Ironically, in Guyana, it is the vast majority that speaks either Guyanese Creole or an indigenous language, or both, and the minority that has control of English. But it is the majority that experiences linguistic discrimination in their own country. It should be obvious that this discrimination is therefore far more unacceptable than that meted out to Guyanese abroad.

The Bilingual Education Project (BEP), run by the Jamaican Language Unit in Jamaican primary schools, pioneered the implementation of an approach which uses both English and Jamaican, alongside each other, as 1) languages for teaching and learning literacy, 2) mediums of oral instruction and classroom interaction, 3) subjects and 4) mediums for teaching and learning content subjects.

Implementation took place in 2004-2008 for a cohort of children moving from grades one to four in that time period. The BEP had the official blessings of the Ministry of Education and sought to demonstrate to the ministry as well as parents and the public, that the option was indeed practical and doable. The project had completing university students in linguistics translate the school textbooks into Jamaican.

A training programme was run for teachers to deliver lessons in both Jamaican and English, and to use the textbook material in both languages. An important new skill teachers had to acquire was familiarity with the Cassidy-JLU system for representing the Jamaican language in writing. Teacher training took place during the May-June period before implementation and during the life of the project.

Ever since the 1980s, Haitian Creole has been recognised in the Constitution of Haiti as one of the two official languages of that country, alongside French, and as the language which unites all Haitians. In the period after the 2010 Haitian earthquake, Michel DeGraff, a Haitian professor of Linguistics at the Massachusetts of Technology (MIT) in the USA got funding from the National Science Foundation (NSF) in the USA to pioneer Haitian Creole language medium education in Haiti and to create online digital instructional materials for the teaching of science, technology, engineering and mathematics in Haitian Creole. This took place under what came to be known as the Haiti-MIT Initiative.

The research conducted within the framework of the project established that the use of the mother language produced children much better at their content subjects than those who learnt them in French. The mother language pupils were also superior in the learning of French.

This research activity was followed by a formal agreement in mid-2015, between the Haitian Ministry of National Education and the Haitian Creole Academy, founded by Michel DeGraff, to introduce Haitian Creole as the language of instruction throughout the education system and throughout the country. The Haiti-MIT Initiative has been involved in the training of teachers and the ongoing development of teaching materials in support of the ‘creolisation’ of the Haitian education system. The whole project has received overt statements of support from perhaps the best known linguist in the world, even better known for his political writing, Noam Chomsky, a colleague linguist of DeGraff at MIT.

In Curacao, Papiamentu, the local creole language, is an official language, operating along with Dutch and English.  Before 1970, Dutch, the language of Curacao’s former colonisers, dominated as the language used in education and Papiamentu was marginalised in the school context. The then educational situation was strongly criticized. Local Papiamentu-speaking children were being disadvantaged. in a system They had to learn to read and write in Dutch, a language that the vast majority of children did not speak. UNESCO analyzed the situation and targeted the Dutch-medium as one of the main problems hampering the students’ educational advancement. Though the inclusion of Papiamentu was much opposed by educational institutions, speakers’ strong identification with their native language caused support for its use in the educational setting to grow.  By the 1990s, the government of the Netherlands Antilles of which Curaçao was then a part embarked on a programme of mother tongue education introducing Papiamentu for literacy and instruction in stages right up the education system. After the dissolution of the Netherlands Antilles in the 2000s, the government of Curaçao adopted the project and has continued the process of the spread of Papiamentu across the education system.

WHAT WILL BE THE GUYANESE EXAMPLE?

We have just presented three examples from other Caribbean territories of educational approaches that take the majority language into consideration. The still relatively new government of Guyana and the new minister of education have a great opportunity to make a historic break with emotional and anecdotal approaches to decision-making on language education that can take us to a future of genuine and sustainable economic and social development.  Here is the opportunity to develop home-grown solutions to education, based on solid research evidence, by engaging with local and Caribbean expertise in devising a language education policy that is appropriate to the language situation of Guyana.

Tamirand Nnena De Lisser is a Lecturer of Linguistics at the University of Guyana. Her main research topic is the L1 acquisition of Jamaican Creole Syntactic Systems. Her research interests include language acquisition, creole linguistics, and applied linguistics.

Hubert Devonish is a retired professor of linguistics at the University of the West Indies, currently Coordinator of the Jamaican Language Unit, UWI, Mona. He is also an external member of the Guyanese Languages Unit Working Group coordinated from the University of Guyana.

Rhonda Jeffrey is a current student in the Faculty of Education and Humanities at the University of Guyana, pursuing a bachelor’s degree in Education. She works as a primary school teacher in an indigenous village in Guyana.

Charlene Wilkinson is a lecturer in the Department of Language and Cultural Studies at the University of Guyana and a founder member of the Guyanese Languages Unit Working Group.