From Ashes We Rise

“From Ashes We Rise” is the latest in the series of exhibitions from the University of Guyana’s Creative Arts Division located in the Department of Language and Cultural Studies. Philbert Gajadhar is a foremost national Guyanese artist and a lecturer at the University of Guyana. He is a former Head of Department. The exhibition opened at The National Gallery of Art, Castellani House, on May 28 and it continues until June 16, 2018.

Usually at this time of the year, after end-of-semester examinations—the lull after the storm—exhibitions from the University of Guyana (UG) come with a clash of palettes; who’s good, who’s bad, who’s in and who’s out. The buzz this time is over the experimental work done by young women artists and the fact that the University of Guyana is becoming the happening place for art that attempts to deal with the complexity and tensions of societies in transition.

If one were to point out some features that distinguish the works of contemporary Guyanese artists, one would mention the renewed interest in folk motifs and a certain self-consciousness about form and representation. The young artists in this exhibition are taking a new look at the very concept of abstraction, the essence of an object or a thought or a feeling; if it means an absence of figure, then it is an exploration of both a presence (which is not seen but felt) and an absence. Added to this is the element of self-scrutiny, a post-modernist accent as against a modernistic rigidity, a denial of the ulterior aim or virtue in art, and an abandonment that brings the student artists close to their individual ideas and thoughts.

Of the eight artists representing the University of Guyana, Elodie Cage-Smith, final-year student and our featured artist, stands apart both by her seniority and her choice of medium and themes. The others are younger, with Keeta Robertson, Chelsea Ramotar and Rayann Darrel in their third year of studies; Keisha Beharry and Alvina Naughton in their second year and Shaquana Cummings and Akeena Mendonca in their first year.

Cage-Smith’s paintings assume expansive, visually complex abstractions. Turquoise features prominently in her work to elicit the calm and volatility of the Caribbean Sea. Her application of colour embodies her notion of what is worn by Caribbean people – not as clothing, but what is in the heart. She points out that while traditional African and Indian prints are strikingly different, the colours are often the same. Her compositions also integrate found objects from Martinique beaches which texture and intricate her canvases. Scrutiny of her work often reveals fragments of rope, mesh, cardboard, fishers’ net, sea glass, and bois flotté.

“I’ve always been drawn to objects that travel,” she says, “because the ocean will ultimately reject them.”

Her new collection which forms and supports her thesis ‘From Ashes We Rise’, explores and symbolises a culture that has been burnt and destroyed in the past by slavery and oppression. The ashes, in particular, represent what remains from what was lost and can never be regained. Cage-Smith says, “The ashes represent us the descendants of slaves, indentured labourers and other historically oppressed people.” Essentially, she wants this collection to be about hope, which is how the name of this exhibition was arrived at: out of darkness and pain she sees the emergence and progress of a society full of light and colours. She chose to look at the general theme of the Caribbean rather than simply Guyana so as not to have to choose or deny the importance of the two cultures which she straddles. She has included an art performance piece which came about as a collaboration with another aspiring artist, Khadijah Carberry. The collaboration was initially an abstract exploration of how the artistic impulse unfolds, it quickly grew and unfolded into a piece that not only explored this but also became a part of the collection ‘From Ashes We Rise’.

Set in a different time slot, Robertson’s works weave the same pattern of nostalgia for a time past.

Darrell’s canvas is interactive, with irregular patterns and a heightened colour scheme.

Ramotar has gone through a series of transformations and transmutations to become a symbol of, and a statement on, the condition of innocence of our time.

Beharry’s works are representative of a deeper mystery of life and a source of strength and power.

A moment of drama unfolds in Naughton’s work, where figures seem to be fighting out an existentialist battle.

Cummings and Mendonca are exploring their own language in painting.

This display of art by students of the University of Guyana is representative of the production of an entire younger generation, who have grown up attuned to the sort of intensive media coverage that now inspires them to speak – beyond any irreconcilable cultural peculiarities – in a universal language. 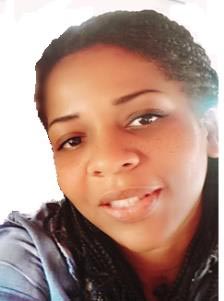 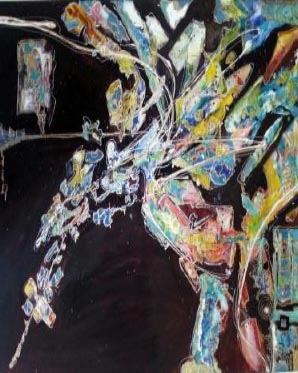 Featured Artist Elodie Cage-Smith is a fine artist living and working in Georgetown. She grew up in Le François, Martinique where her creative interests were first explored at L’institut Régional d’Art Visuel de la Martinique. Her early exposure to fashion, painting, and interior design inspired her to start a small design business in Martinique where she would often paint murals at clients’ homes. Cage-Smith went on to study languages at the University of the Southern Caribbean in Trinidad and Tobago before settling in Guyana in 2010. She decided to hone her painting skills by enrolling at the E R Burrowes School of Art for the Diploma in Painting, where she refined her use of colour, perspective and composition. She subsequently moved to the University of Guyana to pursue a Bachelor of Arts in Fine Art. She majors in Painting and experiments with large dark surfaces and unexpected materials.

Since she has been in Guyana, Cage-Smith’s artistic practice has matured, influenced by the country’s rich history, diversity, and its inimitable relationship with the rest of the Caribbean. Her recent work is a reflective thesis that artfully blends her understanding of the Caribbean’s collective dark past with a relatively sanguine future.

The theme of her current suite of works is ‘Beauty From Ashes’. Her intention is to use visual art to express the rich history of the Caribbean, since she feels that, “Our dark but rich history is the canvas upon which the kaleidoscopically diverse culture of our beautiful Caribbean has been painted”. She pursues this theme through important elements in her work which include using black to symbolize the dark past of the Caribbean yet using a wide range of colours and shapes to symbolize its rich cross-cultural diversity, and gold its wealth. In the same vein, she uses turquoise to represent the magnetic attraction of the Caribbean Sea as well as the limitless opportunities it affords. 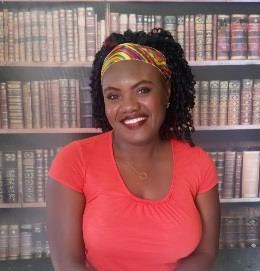 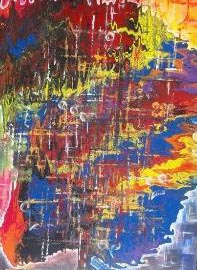 Rayann Darrell first studied at the E R Burrowes School of Art where she graduated with the Permanent Secretary Award. She subsequently successfully completed an Associate of Arts Degree at the University of Guyana, where she is currently a third-year student in the Bachelor of Fine Arts Degree programme. She says, “I have always had a love and passion for art since I was a child. My one true dream is to use my art to inspire the uninspired.” 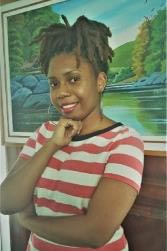 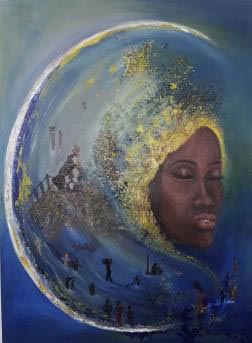 Third-year student Keeta Robertson speaks of art in the sense of serenity as an expression of the inner soul at peace. This is through the diversity of creative applications. Robertson hails from Saint Vincent and the Grenadines, and she intends that her body of work will embrace and represent the journey that Africans travelled and the everyday struggles they endured during their migration to the islands. 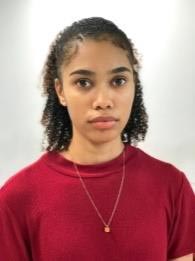 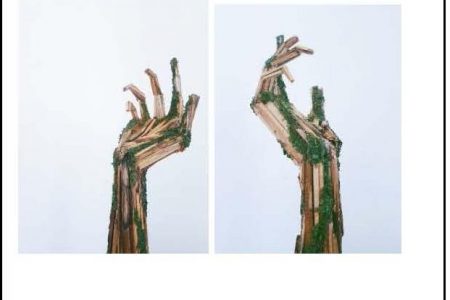 Chelsea Ramotar said she felt the need to make a change after the last exhibition in which she participated (UG’s “Aspects of Perception: the Renaissance” in 2017 at the Umana Yana).  She felt “as though nothing was going the way it was expected to and as a result the path became blurry”.  She had been majoring in Painting, but she then switched her attention to Sculpture. This gave her new life: “I believe the body of work I produced this semester exemplifies this new attitude. Much like my altered mindset, the media used for each piece were… repurposed. The chips of wood or the sawdust could have easily been discarded but instead, they were transformed into something new and meaningful.” 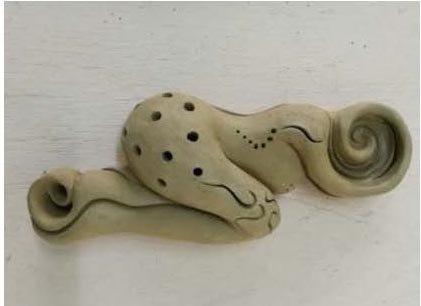 Alvina Naughton graduated with a BSc from UG in 2005, but her deep need to create led her to abandon a possible career in International Relations. After her first degree, she resided in Belgium with her family during which she travelled throughout Europe where she became acquainted with the works of Vincent Van Gogh, Pablo Piscasso and other old masters of art. She returned to Guyana and subsequently enrolled in the BA Art Programme and is currently at the end of her second year. Naughton works primarily with clay, expressing the vulnerability of the female form in her pieces. Other media include acrylic painting, and drawing. She also possesses a penchant for activism through art, creating works which highlight the perpetual evils of domestic violence on the psyche of women. Within this genre, her work has evolved to women’s empowerment through visual arts, focusing primarily on encouraging women to overcome despite their circumstances. She says, “Before this journey, Art had basically been a suppressed passion of mine. It took two decades for me to truly embrace my first love and now the possibilities are endless.” 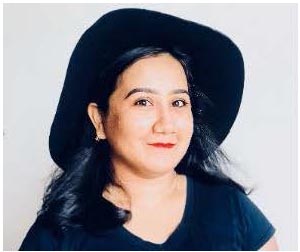 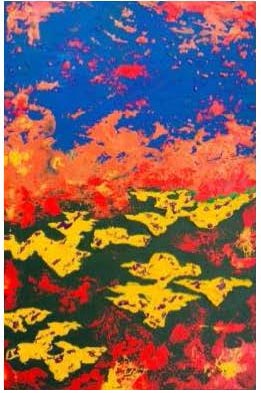 Keisha Beharry’s life has been transformed through art. She reveals, “I have learned what is life with a chronic invisible disorder, and art has provided an inexplicably vast and deep escape, oblivion, healing process, peace and all the while and somehow moulding me to be kinder and empathetic. It is because of art that I have loved, helped and grown.” She credits the UG Art Programme with making a positive change in her life: “From my first class at the University of Guyana, my life transformed through art… Comparing my personal identity and artistic identity from the time of the previous student exhibition to this one, I’m immeasurably different.” 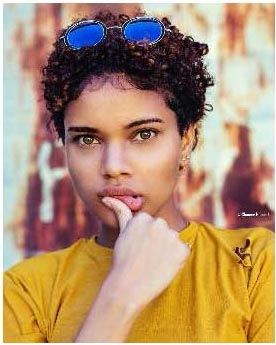 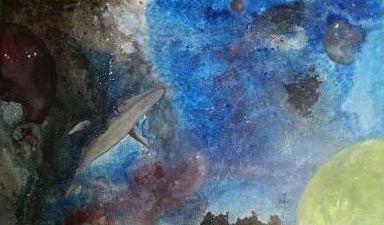 The work of Shaquana Cummings adds a surreal dimension to the exhibition. Quite aware of this, she declares, “Abstract and surrealism have always been my favoured works of art because of their effortless way of twisting reality and creating new worlds.” Not surprisingly, she argues, “Reality is overrated and sometimes we need a getaway from it. I believe that through my art viewers are given the opportunity to understand how limitless the imagination really could be and to freely create their own views and stories without being criticized.”